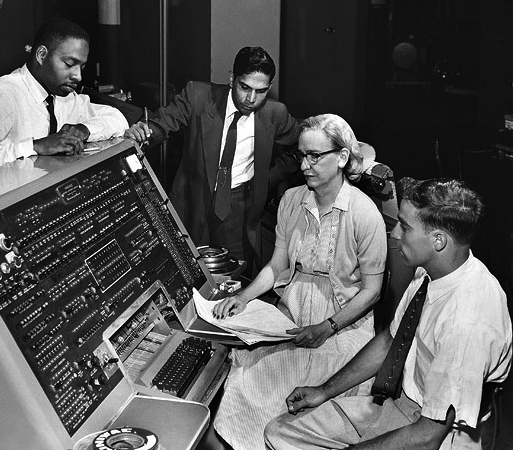 She was one of the first women to receive a doctorate in mathematics from Yale and the first woman to become a U.S. Navy admiral. But for Grace Murray Hopper, that wasn’t enough.

Assigned to work on Harvard’s Mark I computer during World War II, she became an accomplished programmer on top of her other talents. Over the decades that followed, she wrote the first compiler, popularized the terms “bug” and “debugging,” and carried out research on machine-independent programming languages that led directly to the development of COBOL. By the time she died in 1992, she was hailed as a key figure in the history of computing, as well as a trailblazer for women in the tech industry.

Here are a few lessons those women can take from her story.

While in the Navy, Hopper was famous for getting what she wanted from the Pentagon—particularly at night, when no one else was around. She didn’t consider her lifting of office supplies stealing, per se. But her resourcefulness did lead her to sympathize with lawless pirates of yore. Inside her office, she prominently displayed a Jolly Roger flag.

Stealing ballpoint pens is not the best way up the corporate ladder. But Hopper’s willingness to bypass authority helped her in other ways. In 1949, Hopper left naval service to join the Eckert-Mauchly Computer Corporation (soon purchased by Remington Rand). When she first approached her bosses there about developing an English-based programming language, they told her it couldn’t be done. Yet only two years later, she and her team unveiled FLOW-MATIC, the world’s first compiler.

It turned out Hopper was right — it was possible to “program” a computer using simple English phrases, which the compiler then converted into 1s and 0s the computer could understand. Hopper’s innovation eventually became the backbone of the widely-used programming language COBOL.

A good lesson for women in tech: Your industry is one that often rewards risk-taking. Don’t be afraid to fly the Jolly Roger flag and go your own way.

Even as an octogenarian, Hopper was known for her quick, sarcastic wit (TV clips from the time show that even David Letterman had trouble keeping up with her jokes.). According to her biographers, this quality helped put her coworkers at ease — and helped her get what she wanted when she was pirating.

Hopper’s way with words was even a part of her claim to fame. At her post at Harvard in 1947, she came in one day to find that her lab’s Mark II computer wouldn’t work. The problem was later found to be a moth that had flown into the machine. Hopper taped the offending insect into her logbook and wrote beneath it: “first actual case of a bug being found.” And so the term “computer bug” was born.

Communications is often devalued in the tech industry today. People who work in PR, marketing, and journalism—a majority of whom are women—may feel marginalized due to their working with words, rather than code. But the legacy of Grace Murray Hopper shows that this is a mistake. The linchpin of her career was her ability to communicate humorously and effectively. Women in tech — whether they’re coders or PR reps — shouldn’t be afraid to follow in her footsteps.

Hopper’s relationship with modern feminism is difficult to understand. On the one hand, she was a trailblazer for women in technology, whose career included a lot of impressive firsts. On the other hand, she studiously avoided voicing any support of feminist ideals. Whenever an interviewer asked her for an opinion on “women’s lib,” she gave the same retort: “I never had to worry about that, I was in the Navy.”

It might be simplest to state that Hopper would have agreed with many of the ideas in Sheryl Sandberg’s book, Lean In. She believed women in technology didn’t face any obstacles they couldn’t overcome through hard work. Nor did she think there was any point in creating organizations or awards specifically for females. In 1969, she happily accepted the Data Processing Management Association’s first-ever Computer Science “Man of the Year” Award.

Regardless of Hopper’s feelings about “women’s lib,” her legacy continues to inspire other women in programming. Started in 1994, the Grace Hopper Celebration of Women in Computing gathers thousands of women technologists each year for networking and mentoring by leading women in the industry, government, and academia. It’s a fitting tribute to a titan in the history of computing.