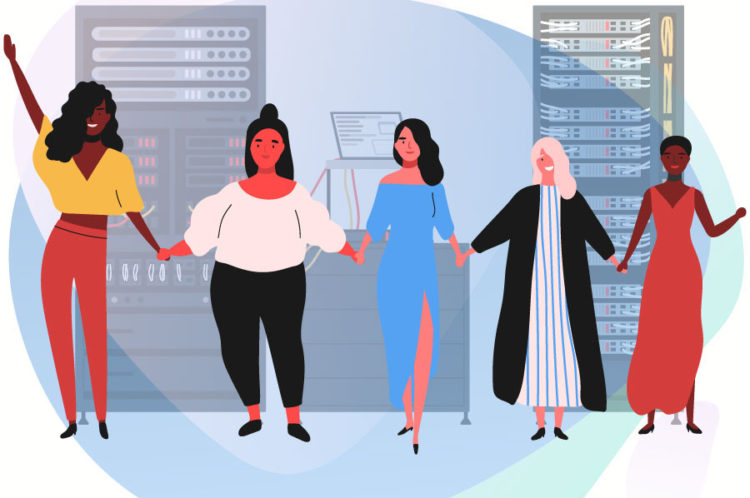 With male leaders outnumbering women four to one, the tech industry has notoriously been a gentleman’s club. Still, more and more women are “leaning in” and finding their places at the table in technology and science. But are their voices equally valued?

DreamHost takes this issue to heart and has been working to support women in tech for years.  And that’s why we reached out to author Therese Huston.

“When it comes to decision-making and leadership, men are from Mars, and women are from a less respected part of Mars,” Huston says. The author of How Women Decide: What’s True, What’s Not, and What Strategies Spark the Best Choices,  Huston shares her insights on challenges facing women in tech — and how we can all do better to make sure every voice is heard.

1. What challenges do women face in a male-dominated field?

A really common complaint — and one backed by research — is that women have to keep proving their competence. People are more likely to notice women’s mistakes and to remember them longer; while with men, we tend to remember successes longer and more readily forgive mistakes.

Related: 6 Things Women in Tech Are Sick of Hearing

2. We like to think that all good ideas are valued and recognized. How true is that in practice?

Sadly, credit is not always given where it is due, especially when it is due to a woman. I’ve heard countless stories about women making a suggestion that doesn’t get picked up, but then when a guy makes the same suggestion later, all of a sudden everyone is enthusiastic about it.

Researchers studying mixed-gender work teams in male-dominated fields found that when a group’s successful problem solving was evaluated by an outsider not present for the collaboration, if it wasn’t specified exactly who did what, it was automatically assumed that a man was the top performer and deserves the credit. That’s really concerning, especially when management teams are doing reviews or considering promotions.

3. What are some key differences between how men and women make decisions?

Actually, research by neuroscientists is showing that under normal circumstances, men and women actually approach a problem the same way. But put them under stress — maybe with a deadline, the threat of a product being cut — and you’ll see a difference. Men suddenly become much more drawn to risks and big rewards than normal. Women do the opposite; they want to do what they know will work, what has worked in the past, what they know they have the full resources to accomplish.

I like to use baseball as an analogy: Men want to go for the home run, which is very difficult to accomplish but offers a big reward, while women aim for the more tried-and-true goal of getting on base. What you want in stressful circumstances is a mix of both strategies.

Unfortunately, all too often in tech at the management level, it’s just a room full of men. What that says to me is that we really need to tap more gender balance in our leadership teams and to listen to the women who get there.

4. How true is it that women rely on emotion in decision-making?

You’ve heard the phrase “woman’s intuition” — but probably not “man’s intuition.” We think of women as going with their gut or following their heart. However, the research shows that women tend to take a more analytical approach; they are more likely than men to do research and analyze possible scenarios and pros and cons. It’s actually the men who are more likely to go with their gut and what “feels right” as opposed to doing the necessary analytics.

5. How are women’s decisions received differently than men’s are?

There’s ample evidence that women’s ideas are more scrutinized. A Yale researcher asked people to read about a scenario in which a male or female leader in a traditionally male occupation made a costly mistake. They then evaluated how good or bad a leader they thought that person was.

When a male leader showed poor judgment, his rating dropped about 10 percent, while a woman making the same mistake suffered three times the penalty, and some people even called for her demotion.

When we scrutinize a woman’s mistakes much harsher than a man’s, that makes it all the more difficult for women to simply be promoted within the organization, let alone reach the c-suite. In tech you’re told to fail early and fail often — but that only really applies if you are a guy.

6. Is it only men who are guilty of gender bias?

Not at all. Women will often think that men’s ideas are more credible, though they are likely to disavow that if you ask them. We all live and work in the same culture and are subject to the same unconscious biases.

7. Sounds like we have a long way to go. How can women make sure their voices are heard?

One of my favorite techniques is amplification. This idea actually came from the Obama administration. Women were finding that their ideas weren’t being heard or given due credit, so they began to amplify one another in meetings: If one woman in the meeting suggested an idea, another woman in the meeting would immediately speak up, name and credit the first woman, and repeat her idea. The women later reported getting credit for their ideas and more opportunities to contribute.

Amplification translates well to tech, where women can team up with each other or a male colleague, and it doesn’t come across as aggressive — a “damned if you do, damned if you don’t” trait commonly criticized in female leaders.

Related: What It’s Like to Be a Black Woman in Tech: A Q&A with Kaya Thomas

8. How can women advocate their ideas without being dismissed as overly aggressive?

There is some fabulous research recently looking at which types of aggressive behaviors work for women in meetings and which don’t. Talking louder or getting angry, for example, is not liked. But one aggressive technique that doesn’t seem to lead to penalties for women is interrupting.

It might feel awkward to interrupt — it certainly does for me — but it’s effective. I don’t mean you should spend the whole meeting talking over everyone, but if there is something you really want to say, then say it. No one is going to call on you; if you’re waiting for a pause, it’s not going to happen.

If you, like me, find the thought of interrupting painful and stress over finding the right moment, try counting backward from ten and when you hit one, blurt out your idea, no matter what. Interrupting gives you a huge surge of adrenaline and helps you stay enthused in the meeting, rather than tuning out and giving up.

Another strategy to help women — or really, anyone — to give their ideas a boost is to frame it as a question. So say “Would it be possible to … “ instead of “What we need to do is … “ Research shows that this phrasing invites discussion and gives ideas more airtime. The phrasing can be a little tricky for women because there’s a fear that they are sounding soft and asking for permission, but it is actually an effective strategy for both men and women looking to get their voices heard.

9. What can men do to support their female colleagues?

For one, they can partner up with the women in their group and try the amplification technique — or simply get in the habit of amplifying good ideas. Prompts as simple as, “What I like about Emily’s idea is . . .” or “I think Samantha suggested that earlier” ensure that women get credit for their ideas.

Managers or others who may want to help without coming across as patronizing could pass along the article about amplification in the Obama administration to team members, starting a conversation about this issue and what everyone can do to help.

Related: Six Women Programmed the First Computer . . . And Didn’t Get the Credit

10. What can tech companies — like DreamHost — do to help?

They need to put conscious strategies in place to counteract unconscious gender biases. In meetings, those in management could make a habit of asking to hear input from someone who hasn’t spoken yet. That creates an opportunity for women to speak up, along with anyone else who might need more time to think through their comments.

Saying something as simple as, “Wait, I want to hear what Julia has to say,” can open the conversation, as can bringing the conversation back to an idea that may have been interrupted. Managers could also take the time to write down the division of roles, so when the work is being analyzed later, women will get credit for the work they’ve done.

We’d love to hear your take! What are some biases you’ve noticed in the workplace? How have these affected you or your co-workers? What strategies have you used to make sure yours — and other’s — ideas are equally heard and valued? And have you tried any of Huston’s techniques? Join us on Twitter and Facebook to start the conversation.