What It’s Like to Be a Black Woman in Tech: A Q&A with Kaya Thomas 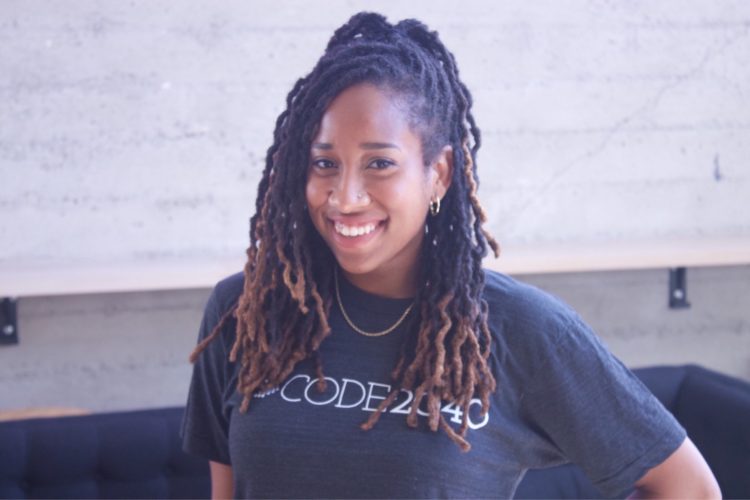 In July 2016, Kaya Thomas, a rising senior at Dartmouth, took on one of Silicon Valley’s largest and most influential tech companies: Facebook. Thomas wrote a response to a Wall Street Journal article that shed light on the company’s diversity problem (only 2% of Facebook’s workforce is Black and just 2% is Latino, but Facebook blamed those stats on the public education system and a supposed lack of talent).

Thomas took issue with that assessment. In her response to Facebook’s excuses, she wrote, “There are thousands of other Black and Latinx who graduate every year with computer science Bachelor degrees. Most of us don’t get hired into the tech industry. So instead of putting in the effort to look for us, Facebook is ignoring the fact that we even exist.”

This summer Thomas is working in Silicon Valley as an intern, and doing a fellowship with Code2040, a group that helps build up Black and Latino talent in the industry. We asked her what it’s been like to work as a Black woman in tech in her internships and what top companies should be doing to attract minority candidates like her.

First off, what led you to pen your “Invisible Talent” piece as a response to the WSJ article?

I was really hurt by reading the piece. I actually felt personally hurt. I knew that I wouldn’t be the only one who felt that way, so I wrote the piece really for the other people who I know who would feel that way, other people of color who are trying to break into the industry and trying to prove their worth. I didn’t get a response from Facebook, but I did get a response from other tech companies that reached out and said, “Great piece, thanks for your bravery, we’re trying to do better. If you’re interested in a position …” Haha.

How can tech companies do better in the talent search?

There are a lot of different ways to approach it. Are you grabbing students from the same top, elite schools? Just because a student went to a top, elite school doesn’t necessarily mean they’re going to be a top engineer. Academics is so, so different from the work you do in industry, so it’s important to branch out. Look to more schools, state schools. Look to more local schools, look to more historically Black colleges and universities. Look to more historically Hispanic institutes. There are a lot of schools that are not being included in their recruiting pipeline.

Then if you’re looking for more senior people, not necessarily looking for recent grads, you just have to expand your network, right? Do a better job. If you’re a company, sponsor a women-who-code meetup or sponsor a Black techie meetup. I’m not saying it’s easy but if it’s a priority of your company and you put in the time and effort, it’s definitely doable.

Obviously, you would be a good candidate for most of the job opportunities out there in Silicon Valley. When you’re looking at an employer, what do you look for in them? What can they do to make themselves more appealing to a Black woman candidate?

I look to see if empathy is a part of the engineering culture there. If you have an engineering team who is really just building for themselves and not really thinking about the users and the situations that they’re in, the team may not be open to branching out to see, “How can I build this for someone who doesn’t live the same life experience as me?”

Technology talks a lot about reaching the whole world, but if you really want to reach the whole world, you really have to be empathetic and think about how other people live. That means prioritizing things like accessibility, thinking about, “How will people who don’t have access to fast internet speeds access your content?” Small things that really matter because not everyone is from the same walk of life. That’s something that’s really important to me.

Then I look to see, what is the demographic makeup of the company. More often than not, there aren’t that many women of color working in engineering. Even if there aren’t, can there still be mentors? Is there a culture of mentorship and growth? Can I grow and learn a lot there?

And making sure that inclusion — not just diversity in hiring — but inclusion, how do you retain people, are making them feel safe and feel heard and like they belong?

What about once you’re there — what is it like to be a Black woman at a tech company?

It has been different at different places. I’ve just come to the realization that I usually won’t have another Black woman on my team or another Black person on my engineering team. To date — I’ve done three internships — to date I’ve never worked with another Black engineer on my team.

When you’re actually in the environment, it’s important to be on a team where I feel like can be my whole self — where I can — and it’s hard to define what that means — but for example, if something tragic happens — a lot of tragic things have been happening in America — and someone is killed by the police in another community, can I go to work and talk about that? Especially if I’m the only Black engineer, will my team get it, will they empathize, will they understand? That’s really hard.

The thing about being a person of color in this industry when you’re actually in the company, there’s a sense of hyper-visibility and hyper invisibility. There’s hyper-visibility in the sense that you’re seen as that Black person who works on the team or that Latino person who works on the team — it’s very obvious that you’re the only. But then there’s hyper invisibility. The microaggressions and other things you might face in the workplace are invisible to everyone else.

Has it been hard this summer being in Silicon Valley with the continued police violence and killings that are being perpetrated against Black people across the United States?

I’m on a team where I do feel like they get it, which is important, but I still sometimes didn’t know what’s the time and place, what’s the appropriate moment to bring this up — or if I’m going through something, can I leave early?

They might understand but they may not feel it as heavily, they may not feel the pain and the fear quite as much. I’m from Staten Island, New York. What happened to Eric Garner happened right around the corner from my house. I’m from Staten Island, New York. I literally live right around the corner from where he was killed. I grew up going to that beauty supply store that he was killed right in front of. That block, a lot of my family and friends chill on that block.

And what’s hard about specifically being a woman?

I’ve always worked with other women, that’s been great. I’ve been pretty lucky, I’ve never experienced working with any creepy men, so I feel really grateful for that, but I know that’s not the case for a lot of my peers. There’s the thought in the back of my mind … I’ve been lucky for now, right?

How can you work with your peers to take on this industry that can sometimes feel like an exclusive all-boys club?

Women of color need to stick together and build our networks strong, because that’s what rich, white men have been doing for … ever. I think it’s important to build our networks, stick with each other, and spread opportunities.