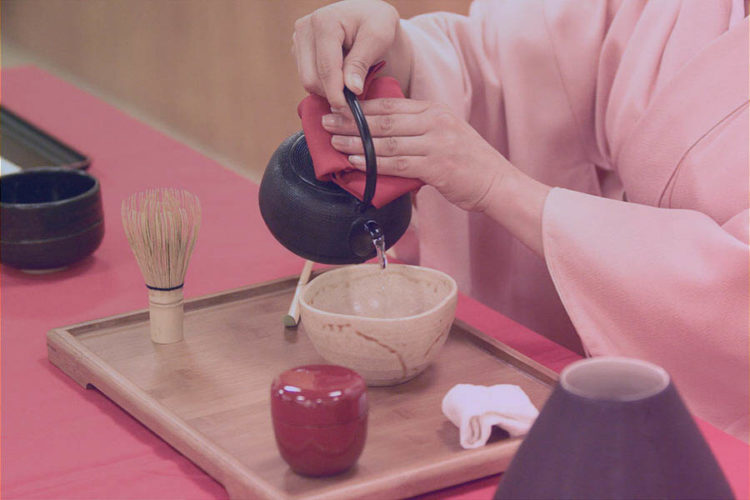 Los Angeles native Mark Umbriaco is always looking to experience a new piece of his city’s patchwork of culture. So when he and a friend spotted a chance to sit in on a Japanese tea ceremony at an arts festival 15 years ago, he didn’t hesitate.

They packed into the venue and nabbed the only open seats — up in front, next to a kind-faced old man wearing a kimono. “And everybody kind of freaked out,” Umbriaco remembers.

Until that day, Umbriaco’s only experience with the intricate rituals of serving matcha green tea had been a glimpse into the Japanese pavilion at SeaWorld San Diego as a kid in the 1970s.

So he couldn’t have known that he had just squeezed himself into a delicate art, steeped in a cultural tradition of honor and respect, that proscribed everything from how to hold the tea bowl to where to sit and what to say. Or that the kimono-clad man was tea master Hounsai, head of a leading school of tea and part of a powerful family in Japan.

“He was a very welcoming, very distinguished old man,” Umbriaco says. Excusing the etiquette breach, Hounsai embraced the newcomers. “He was just such a personable, kind, engaging, present person that I walked out of there thinking, ‘What is this?’ I was really impressed.”

Wanting to learn more about the philosophy and practice of tea, Umbriaco sought out a sensei at the Urasenke Tankokai L.A. Association. Headquartered in Kyoto, Japan, this 400-plus-years-old organization spans the world with branches from Europe to Peru, teaching the Way of Tea and sharing a friendship that both celebrates and transcends Japanese culture. 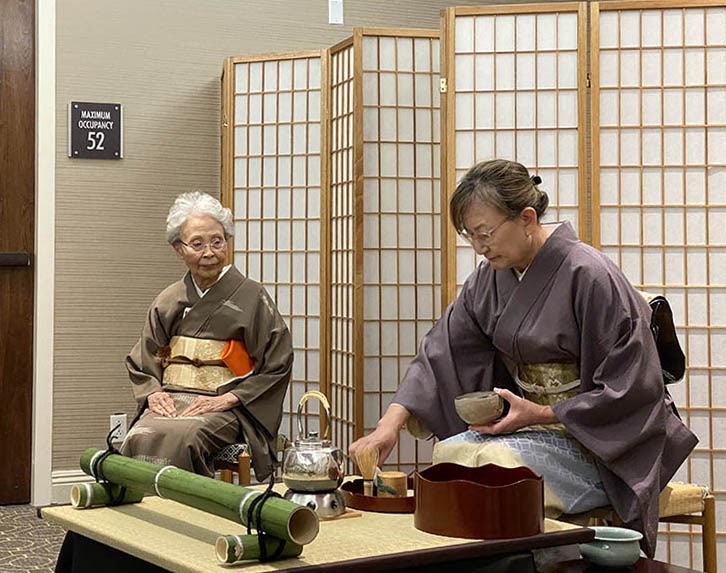 Umbriaco is the outgoing manager of English-speaking students at the association, where members practice, teach, and learn the art of Japanese tea. Most members, Umbriaco explains, are Japanese expats — but there’s a growing number of students who don’t speak Japanese, and that group is as diverse as L.A. itself.

The teahouse uses DreamHost to power its online presence, which serves as a platform to reach across culture and language to pass the practice on to a new generation.

“The members that are Japanese are getting older, and the practice of tea is a living art form,” Umbriaco says. “And in order for it to exist, especially in areas where the change is the greatest, they need to draw in a lot more people, and the web is the place to do that.”

The Way of Tea — A Hands-On Experience

Translated from Japanese, chado means the way or the practice of tea. Japanese tea ceremonies — or, more accurately, tea practices — are about more than sharing a drink. Practicing tea is a cultural expression, an art form that connects participants to each other and challenges them to embrace the present moment.

“There are very small ceremonies that take 10 minutes, and the overall expression of a tea event takes more than four hours, almost five hours, to perform,” says Umbriaco, who has studied with the same sensei for 15 years.

Tea can take years to learn and a lifetime to perfect.

The practice follows a simple outline: It begins with purifying the tea implements (tools) and continues with preparing and serving sweets and green tea, before cleaning up and closing. Those who practice tea must become masters of etiquette. Even the smallest movements are governed by tradition, and participants keep a calm pace and demeanor while respecting the honored roles of guests and host. 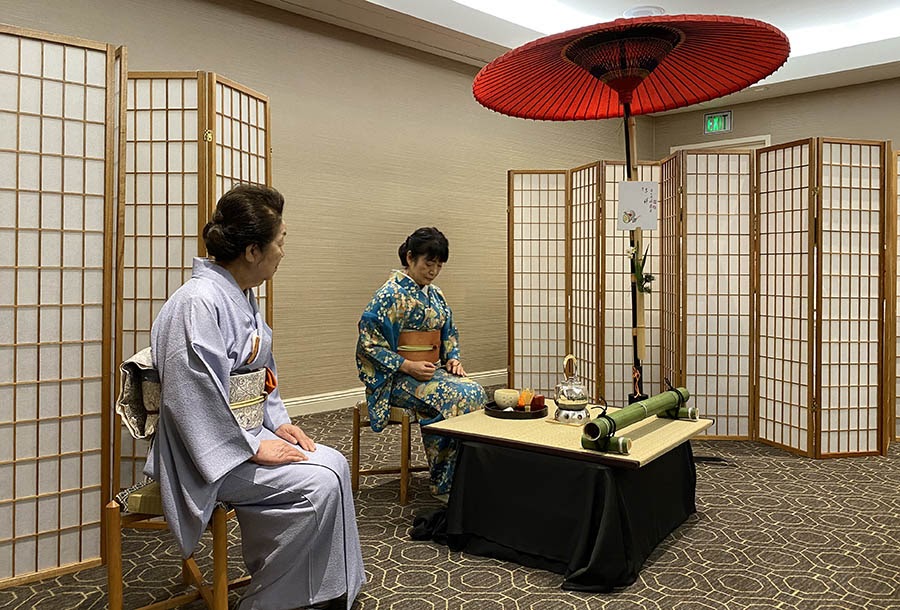 “Tea is a strange animal,” Umbriaco says. “It came out of Zen Buddhism, so there’s a lot of Zen elements you can find in tea. We purify the mind and the body and the implements before we make tea. As you enter the tea space, it’s supposed to be an other space; you the dust off the troubles of the world outside, and you enter this space where all people are the same. No one is above another person in the tea room.”

Beyond the rules and etiquette, tea practitioners must master mindfulness, an awareness of the ever-fleeting present. They have a saying in tea: “one time, only time.” It doesn’t matter how long or short a ceremony is, it will happen only once. No matter how hard you try, you simply can’t recreate a moment.

In addition to its spiritual origins, “tea is also steeped in secular Japanese culture, so there are many, many rules,” Umbriaco says. “I should be able to go to a tea event in any place in the world and expect to know exactly what is going to happen. When you enter this tea space, you kind of lose yourself. Physically and culturally. And then everybody comes together. It doesn’t matter what language you speak or where you come from.”

Several tea schools were established in Japan hundreds of years ago to facilitate this learning and connect senseis with students and resources. This includes the Urasenke Tankokai school, led by the Senke family. The school, in particular, charges its branches the world over, including the Urasenke Tankokai L.A. Association, with sharing the practice of tea.

After World War II, Honensai — the tea master who graciously welcomed Umbriaco into his first tea practice — led in the expansion of tea outside of Japan. “He saw tea as a vehicle to express Japan’s willingness to be a force for peace and not war as it had been,” Umbriaco explains. “He has gone to great lengths to spread tea throughout the world. He is probably the best ambassador for tea in its entire history.”

Honensai distilled the purpose of the school into one phrase: “peacefulness through a bowl of tea.”

With that statement, tea masters founded associations around the world, reaching L.A. about 60 years ago. “And so from there, it has just grown,” Umbriaco says. “That message of peace resonates with a lot of people.”

The practice of tea is most prevalent in regions with large numbers of Japanese expats, including Southern California and San Francisco. But Umbriaco has participated in tea in places such as Texas and the Midwest, locations with more American practitioners than Japanese.

Today, the Urasenke Tankokai L.A. Association has a primarily Japanese membership, but the portion of non-Japanese speakers in the association is growing steadily.

“L.A. is a very densely populated, multi-cultural place,” Umbriaco says. “And tea has become a part of that. I have had tea in Los Angeles from women in hijabs. And I’ve practiced with people from Africa and Italy and South America and Mexico and all places in North America. So it actually reflects the population and the people that are in the area.”

The Urasenke Tankokai L.A. Association functions as a social club where members meet to practice tea, as well as a connection point and place of learning for sensei and student. As with any education and artistic expression, practicing tea doesn’t come cheap — sweets, matcha green tea powder, and the crafted implements have a cost, and everything a sensei makes from instructing goes right back into practicing tea. The association gives practitioners access to tea implements that might otherwise be beyond their price point. 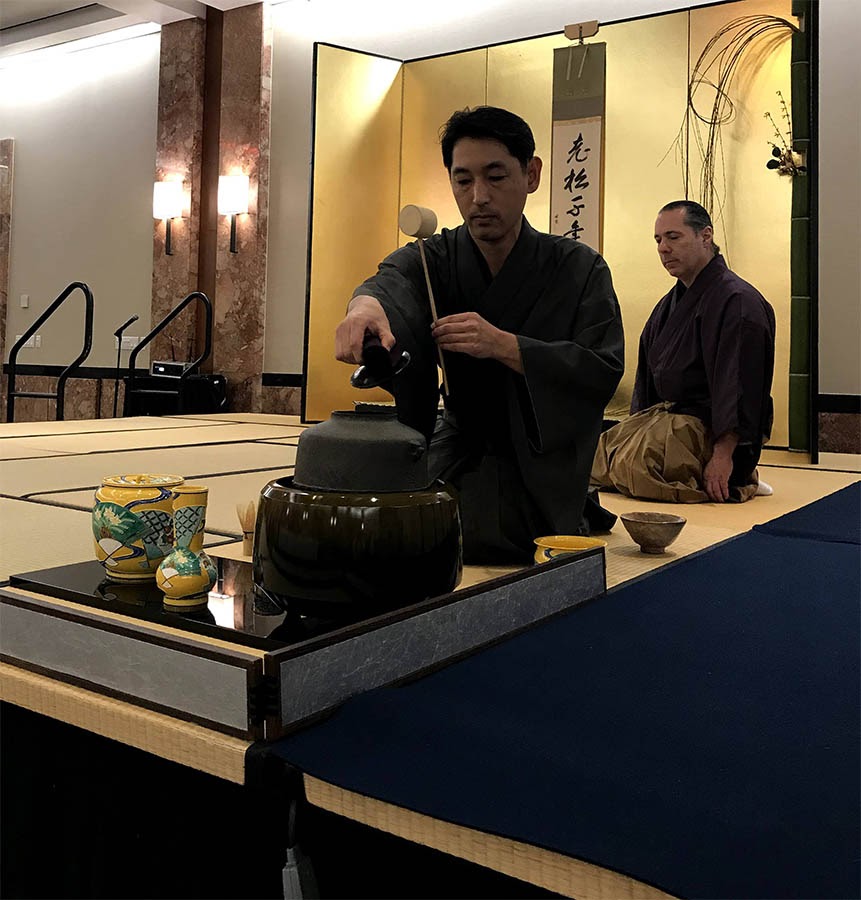 In keeping with their charge to share the way of tea and promote “peacefulness through a bowl of tea,” association members perform demonstrations in the teahouse and at cultural events across Southern California. Tea, says Umbriaco, is a visual way to share and represent Japanese culture. The purpose of tea demonstrations is to invite newcomers to come and see and join in — just as tea master Hounsai welcomed Umbriaco — and to carve out a piece of Japanese culture within the diverse landscape of L.A.

The most elaborate ceremonies draw in and celebrate the best of Japanese artistry.

“It’s considered a very special event, and within that event, it incorporates pretty much every artistic form that is available in Japan,” Umbriaco explains. “So, in that event, you would wear your best kimono. You would experience the best calligraphy. You would experience the best food, the best sake, the best tea, the best manners; the best of everything Japan has to offer is incorporated in the longest events, and even for Japanese people, it’s a rare and very special thing.”

A living art form with ancient roots needs a dynamic website that reaches across cultures. That’s why the Urasenke Tankokai L.A. Association chose DreamHost shared web hosting and WordPress to power its online presence. Shared hosting got the association up on the web with WordPress installed, offering the freedom to create a beautiful, custom website that’s simple to maintain and navigate, no matter what language you speak.

“It’s a beautiful website that was easy to construct and use by people who don’t speak English as their first language; the people in our association can use and trust the site to meet their outcomes,” Umbriaco says.

And so can their intended readers: Americans and expats alike looking for a place in L.A. to learn about tea. “There’s a lot of younger people in college that are interested in world culture or Japanese culture, or who are learning to speak Japanese. They can reach us through the website; it’s what people looking for tea in Los Angeles are going to see.” 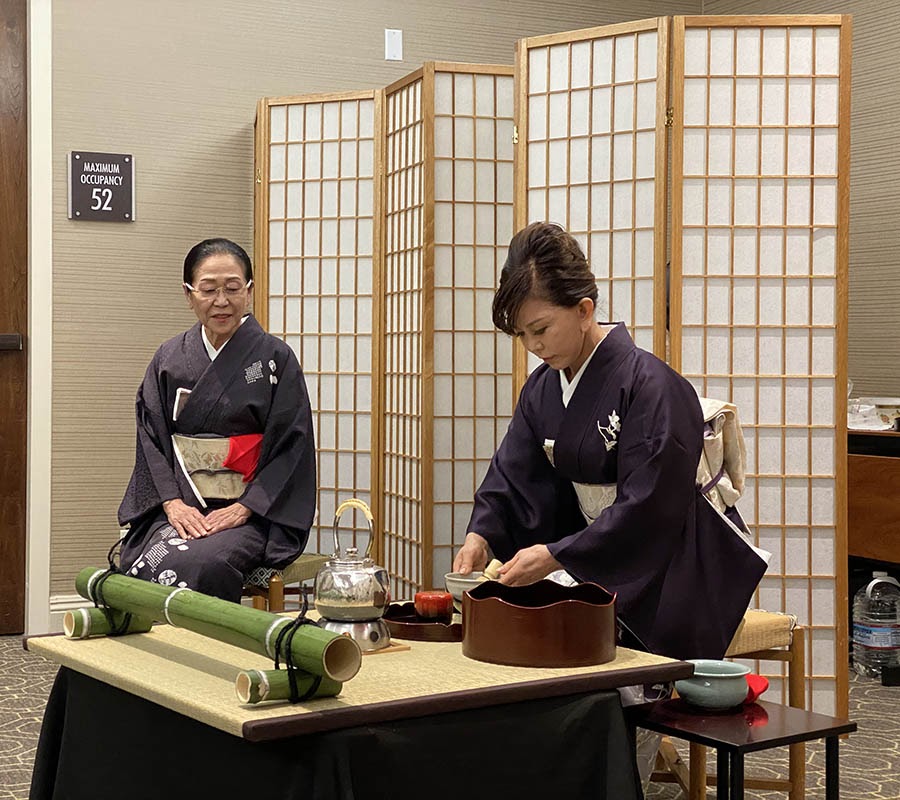 He’s proud of the website and of its role in making an ancient art form relevant to modern audiences.

“Tea is old; it has been around for a long time,” Umbriaco says. “Tea is also a living art form. And there’s nothing dead about it. That is the leadership from the Senke family and the leaders of tea. But for it to be relevant, it must be current. You can talk about peace all you want. But if people don’t know, then it’s not relevant.”

An art form that promotes and practices peace, as well as mindfulness and respect for the present, is always relevant no matter where or who you are.

“Visit Los Angeles and have tea with us,” Umbriaco adds. “There is something for everybody in tea, as long as you’re willing to practice that mindfulness and be present.”